Skip to content
HomePosts tagged 'Eoulrim Church of the Nazarene'

When I attended the Korea National District Church of the Nazarene district assembly back in March, I met the pastor, Tak Kyung Sung, who told me then he would like to have me come and speak at his church. However, my duties as pastor of the Traditional Protestant Congregation on post kept me from being able to do much else on Sundays, so I haven’t been able to attend but I kept in touch with Bashir, one of the pastors at the Eoulrim church. Bashir and I have been able to get together a few times since the district assembly. Through Bashir, I was finally able to attend worship at Eoulrim Church of the Nazarene, on my last Sunday in Korea.

“Eoulrim” means together or in harmony. That is an exciting name for a church, reminiscent of Acts 2 when “they were all together in one place.” Eoulrim Church has multiple services on Sunday; I first attended the main service at 1100 where I was asked to briefly share a little about what I do as an Army Chaplain and what brought me to Korea. Here’s a clip of that introduction which ends with the gifts they gave me for being there. The first part of my intro didn’t make the video. What you miss is, “Good morning. My name is Daryl Densford and I am from the United States. I am the fifth generation in my family to be a member of the Church of the Nazarene…” :

I really enjoyed being in this service, even though it was in Korean. As I have commented in previous posts, the language spoken is often not as relevant as the presence of the Holy Spirit and the feeling of being among family in the Church of the Nazarene. I also experienced this when I attended Tree Planted by the Water Church of the Nazarene. It is a wonderful feeling to be able to feel “at home” wherever in the world God takes you! One of the songs we sung in this service spoke of God being present in the service. I was moved to tears when Bashir told me the lyrics, having just written about the significance about God’s presence in services where I don’t know the language the night before! 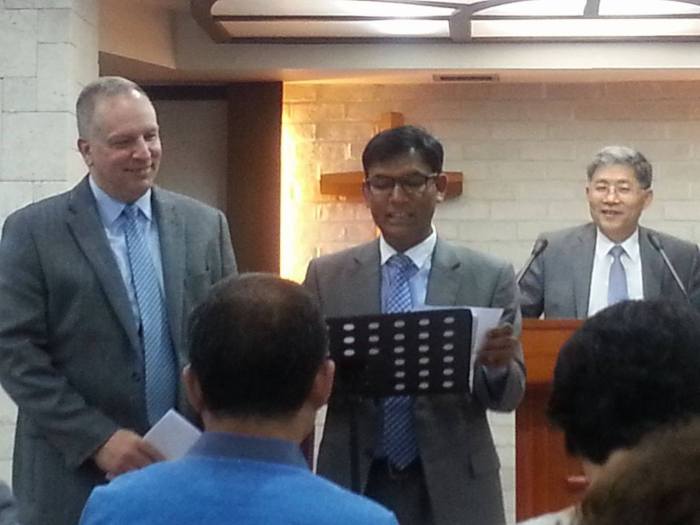 One of Bashir’s daughters sung with the music team in this service (on the left in the below picture). She also knows English very well and helped Bashir with the translation of my introduction. The music was very good and the congregation sang with enthusiasm: 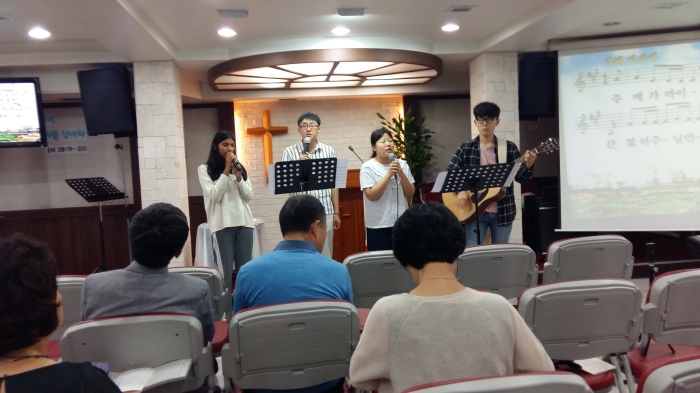 The pastor spoke with what felt very much like God’s empowerment. While I couldn’t understand what he said, I certainly felt God’s presence during his message. Bashir skimmed the wave tops with his translation (sitting beside me) so I got enough to understand his urging his people to work with God in His movement and leadership and expect God to do great things.

Following the first service, the congregation went up to their coffee shop for lunch together. I ate with the pastor, Bashir and another visiting minister in the pastor’s study (off of the cafe), and enjoyed the conversation. The lunch was a traditional Korean meal with rice, beef (I think Bulgogi), kimchi, noodles and some green stuff (sorry, not sure what it was). I ate some of it, but even after a year in Korea I haven’t been able to acquire a taste for all of it.

The visiting minister and I had an especially long (and meaningful) conversation as Bashir and the pastor were active with doing “pastoral” things. He had studied and taught in the U.S. in the D.C. area and had significant insight into American-Asian cultures and interaction as well as the mission of God.

After lunch we went to the next service at 1400, which was also in Korean. At this service, in addition to more good music, the visiting minister who had studied and taught for many years in the U.S. spoke to the congregation from Acts 1:8. For being a Southern Baptist, he had quite a bit to say about the work of the Holy Spirit, from what I got from Bashir’s wave-top translation and the little bit of English the preacher used (I think for my benefit)!

Another of Bashir’s daughters sung a special at this service. Here’s a video of her:

Next was the English service at 1530. At this service I had the privilege to preach. Even though it was an English service, many of those in attendance are still learning English, so some (most) of my sermon was translated into Korean by my friend Bashir. I think this may have been more difficult than translating straight from English to Korean as there was more discussion about the best words to use both in Korean and English.

Because of the way the translating was being discussed, it was much more “conversational” but occasionally I would get going without pausing for translation which caused Bashir to have to re-preach that portion of the message. Many times it felt like we were team-preaching which seemed to be very effective since I’m not familiar with Korean language or culture. It turned out to be a very fun time. 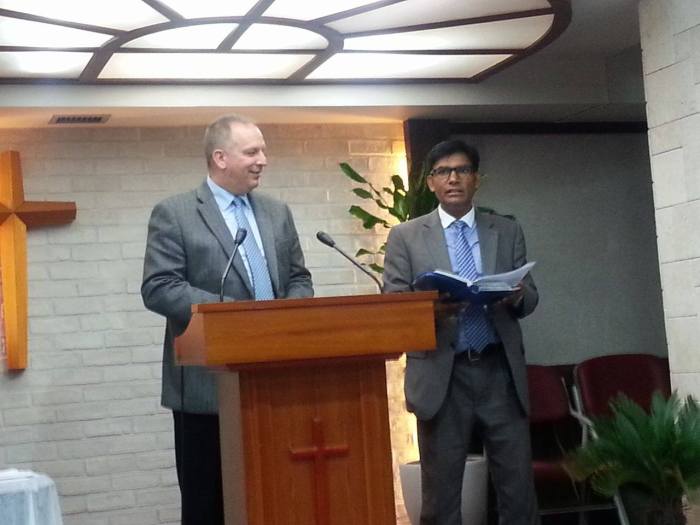 This was another great experience for me (as are most times when I am able to preach). I always get excited at the “international-ness” of the Church of the Nazarene when I have the opportunity to minister among them in other countries.

You can find more about Eoulrim Church of the Nazarene at their website, www.eoulrim.net