Lotteria is a fast-food restaurant that was founded in 1972 and came to Korea in 1979. Their stated mission is to care for customers, the environment and the future. As one who frequents a variety of fast-food restaurants, I would rank Lotteria above McDonald’s and Wendy’s, closer to the level of Culver’s or Five Guys.

I previously had eaten at Lotteria to try their Bulgogi Burger to compare it to the one I ate at McDonald’s and decided that Lotteria’s Bulgolgi Burger is slightly better than McDonald’s. On this occasion, I went to Lotteria for breakfast, the first time eating out for breakfast since arriving in Korea (other than on-post restaurants). What was surprising about my visit to Lotteria for breakfast was that while the sign advertises breakfast being served from 0400 to 1100, there were no breakfast sandwiches ready in the warming bin, only burgers. The cashier told me it would be 7 minutes, which I agreed to (really wanting breakfast rather than lunch) and she gave me a beeper to let me know when it was ready which I thought was pretty advanced for a fast-food restaurant.

I haven’t seen on any Korean-restaurant menus the option of a breakfast sandwich on a biscuit, which would be my choice in the U.S. It seems the only options are English Muffins, at least at fast-food restaurants. Despite not being on a biscuit, the sandwich with sausage, cheese, egg and bacon looked good so I ordered it in a “set” (what we would call a “meal” or a “combo” in the U.S.) which included hash browns and a drink…I chose Pepsi, reluctantly, since they didn’t have Coke. The charge for this meal which included the sandwich, hash browns and a drink was just ₩4200, about $3.64. 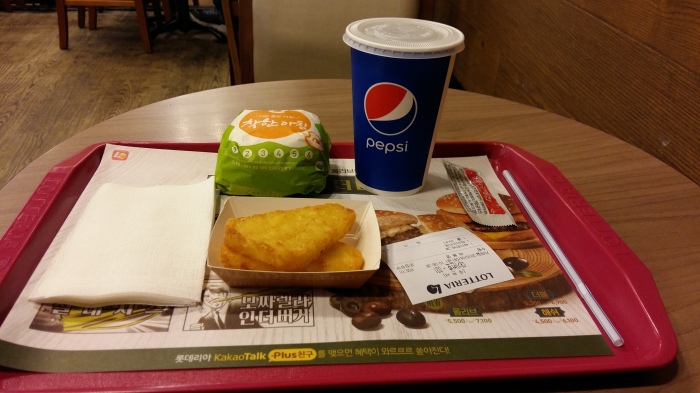 My order was ready in about the 7 minutes, as promised and was hot and fresh (the advantage of waiting). Not being an English speaker, the cashier pointed to the straw dispenser as she gave me my tray which, along with my food, was already stocked with napkins and 1 ketchup packet. The hash browns were triangles and 2 came with the set. I’ll start with them, they were tasty, no different (maybe a little better) than McDonald’s hash browns and definitely better than Burger King’s “hash rounds.” I’ll quickly say that the Pepsi was fine, but it was Pepsi. Lotteria would do better to carry Coke products, but that’s just my opinion. 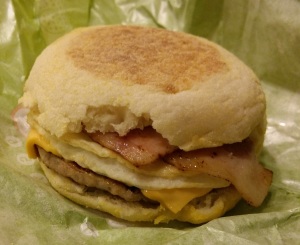 I was hungry and ready to get into the sandwich. I opened it up and it looked as it should, or at least it looked how I expected it to look … Purchased sandwiches never look as good as the advertisements. It looked good, though I did notice the bacon wasn’t crispy. It seemed more like Canadian Bacon, though it was shaped and sized like regular bacon and tasted more like bacon than ham. The sausage was good. It was seasoned well but not too spicy. The egg was cooked like McDonald’s cooks their Egg McMuffin eggs (I like the biscuit sandwich eggs better) but it was still good when combined with the sausage, bacon and cheese. The English Muffin tasted fine, though it seems like it could have been toasted a little more; it was a bit soft. 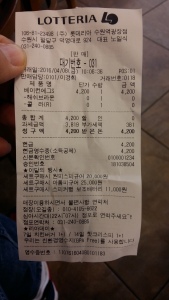 There was no Korean influence on the flavor of this meal, it was pretty basic but overall, I was very satisfied. Even with those things which were a bit different, it was a delicious sandwich and the hash browns complimented it well. I realize Lotteria isn’t a “high-class” restaurant, it’s fast food, so let me amend my review to say that for fast-food it was delicious and I’ll definitely eat there again.

Once my meal was complete, I took my tray to the trash and noticed that Lotteria, like most other restaurants in South Korea, has a place to separate your recycling, trash and food waste which fits into Lotteria’s stated concern for the environment. 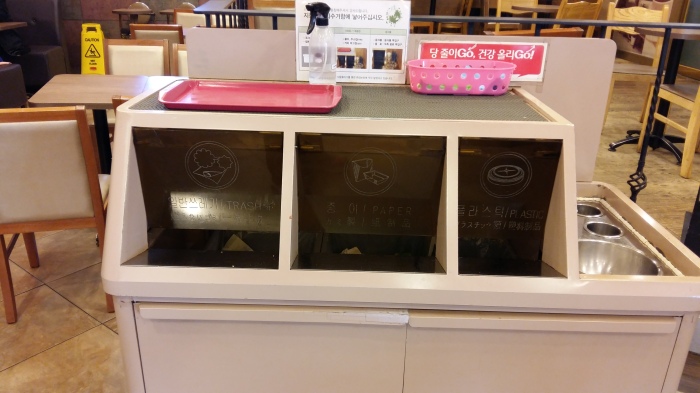