Since I have been in South Korea, one of the things that I have been asked is if American-branded food tastes the same in Korea as in the United States so I decided to do a little exploration to find out. I sought out the standard of Americana-McDonald’s-as my first test. I went to the one in Itaewon, primarily because it’s the only that I know the location of (and can easily walk there) and because I have been there before to try the famous Bulgogi Burger.

Having been to this McDonald’s before (and to other McDonald’s around the world), I was pretty familiar with the process so went straight to the first open register I saw. I ordered a #3 meal with Coke, that’s a Quarter Pounder with Cheese meal. I figured, what could be more American than a Quarter Pounder since the U.S. is about the only country in the world not on the Metric System? I was pleasantly surprised at the price of just ￦5000, though it comes with what is a “small” drink in the U.S. with no option to “super-size.” The order was quickly filled and placed on my tray with 1 catsup packet, 5 napkins and a sale advertisement.

Arriving at my seat, one of the first things I noticed was that the required space needed for my American body must be greater than that of the average Korean…but that’s a topic for another post. I opened my sandwich to find a protective sleeve like Big Macs in the U.S. use to come in. This kept my Quarter Pounder with Cheese nice and tidy. A quick perusal under the crown revealed the standard McDonald’s condiments for the Quarter Pounder. As I bit into the sandwich … (before I go on, you need to know that I ate at McDonald’s a lot back in the United States-a LOT. And my meal of choice was the Quarter Pounder with Cheese. Now, back to my review) … I was transported home. The texture, taste and satisfaction was the same, if not better, than what I would expect to find at any McDonald’s in the United States. My next taste was the french fries which were equally satisfying, if a bit less salty than in the U.S. Then the Coke which I’ve found to be the same about anywhere you go (except Mexico whose formula still includes real sugar instead of high-fructose corn syrup-those lucky Mexicans!). 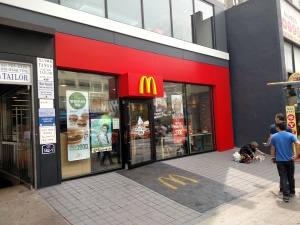 After completing my meal, I handed my tray with trash to the nice gentleman by the door who sorted the trash for recycling, then I left the Itaewon McDonald’s satisfied and convinced that just about anywhere you go, you’ll find McDonald’s quality and standards upheld, with the serendipitous benefit of local flavors added to the menu.